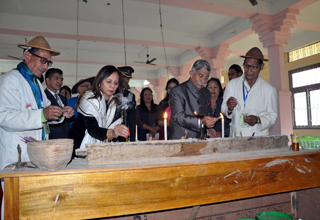 MONIGANG, Jan 19: Governor Dr BD Mishra visited Monigang and Aalo in West Siang district on 19 January and informed about the Army recruitment rally to be held at Likabali in Lower Siang district from 5 to 8 February.
Mishra, who is the first governor after the statehood of Arunachal Pradesh to visit Monigang, exhorted people to motivate the youth to join the Indian Army and reminded them that the homegrown soldiers will be the best fighters to defend the country.
He also called upon women to come forward and be partners in the development process.
The governor said that the central government is giving emphasis on the development of border areas through model village programmes, adding that grants and aids provided through these programmes must be judiciously used.
“There must be transparency, accountability, continuity, review and audit and midterm correction, if need be, in all public expenditures,” he said.
The governor also instituted three cash awards of Rs 5000 each for ‘best Swachhata Abhiyan organizer’, ‘best house frontage’ and ‘best shop frontage’. The competition will be conducted by the district administration.
Earlier, the governor interacted with the troops of the Indian Army and the Indo Tibetan Border Police stationed at Monigang, and appreciated their high moral and élan. The governor complimented them on their zeal and resolves to keep every inch of our motherland safe and secure.
The governor also asked the Army and ITBP personnel to accept a goodwill token sum from his discretionary grant for their ‘bara khana’.
While returning from Monigang, the governor visited Aalo and addressed a public meeting at Gumin Kiin.
He asked the gaon burahs, panchayat members and the general public to ensure proper utilization of public fund so that the projects take proper shape.
The governor and his wife also visited the general hospital in Aalo and interacted with doctors, nurses and patients. They also distributed fruits to indoor patients. Later, they visited the government higher secondary school and interacted with the students and teachers.
They also paid obeisance at the Donyi Polo temple at Aalo to invoke the blessings of the divinity. (PRO to Raj Bhavan)