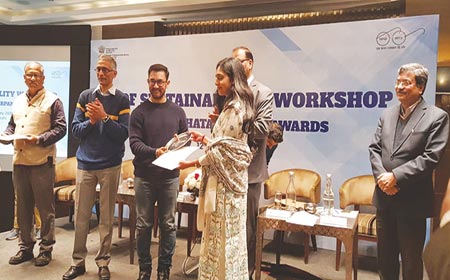 NEW DELHI, Jan 12: West Kameng district has been adjudged the best in Arunachal and came second in the country in the ‘Swachhta Darpan – Open Defection (ODF)-Free Sustainability 2019’ contest conducted by the Jal Shakti ministry.
The contest had been organised by the ministry to assess the activities carried out by the districts with regard to ODF sustainability.
West Kameng DC Sonal Swaroop was felicitated by Bollywood actor Aamir Khan, who is the ambassador of Pani Foundation, during a function here on Saturday.
The DC was accompanied by Bomdila PHED EE Niapung Konia.
Khan congratulated the awardees and lauded their role as “leaders on ground to bring about behavioural change in people and making an open defecation-free India a reality.”
He urged everyone to work tirelessly and keep on imparting awareness among the people in order to sustain the achievements.
Swaroop lauded the exemplary activities carried out by the PHE department in West Kameng, and said the achievement would not have be possible without the tireless efforts made by Konia and all his officials.
“The team has done exceptionally well in reaching out to the people in rough terrains and harsh weather and carrying out extensive IEC campaigns, which brought a positive impact in the district,” she said.