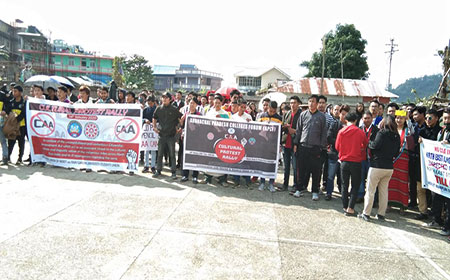 [ Marli Kamki ]
ITANAGAR, Jan 24: The students’ unions of Rajiv Gandhi University (RGU) and North East Regional Institute of Science Technology (NERIST) on Friday staged ‘Cultural Protest March’ against the controversial Citizenship Amendment Act (CAA), demanding immediate scrapping of the Act. Hundreds of protestors clad in traditional attires of different tribes of Arunachal and the northeast including Nagas and Assamese chanted anti-CAA slogans during protest march which started from Akashdeep and culminated at Tennis Court here.
The students adopted new method of expressing anger against the discriminatory law days after the Supreme Court refused to stay it.
A street play was showcased by the students of NERIST highlighting the socio-economic impact of the CAA 2019 on the Northeast region. Another drama was also staged by the Naga students from the same institute to highlight the imminent threat to the culture and tribal life of the indigenous communities in the region.
Addressing the media, RGUSU President Dopum Sonam stated that the idea behind this unique “Cultural Protest March” was to show that the fight in North East is for protection of culture, identity & existence.
‘Our culture and tradition is in great danger due to passing of the Citizenship Amendment Act,’ he added.
“Although the apex court has agreed to hear the Anti-CAA petitions with regards to Assam and Tripura separately, we have decided to continue our peaceful protests from time to time until the hearing process is completed. The same and other details were discussed in the meeting with representatives of other universities of the region at Tezpur recently,’ informed Dopum Sonam.
In his address Naga NERIST’ Students Union president, Vungthungo L. Murry expressed his discontentment with the Government and said that leaders from the region need to serve the people who have voted them and not the illegal immigrants.
Members from the North East Students’ Organization (NESO), Arunachal Pradesh Collegian Forum (APCF), Arunachal Pradesh Anti-Corruption Union and students from Dera Natung Govt. College, Itanagar also joined the protest march. (The reporter is an intern at ‘The Arunachal Times)