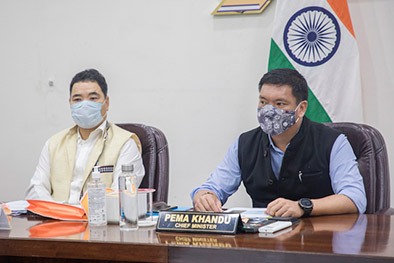 NAHARLAGUN, 9 Apr: Chief Minister Pema Khandu on Friday said the state government would fully cooperate with Tomo Riba Institute of Health & Medical Sciences (TRIHMS) with regard to its expansion and growth.

Chairing the fifth governing council meeting of TRIHMS here, Khandu called for a “realistic and practical proposal” for appointment of faculty members and other staffers for consideration by the government.

He also said “there is a need to define the staffers of the health services department and that of TRIHMS.”

Taking stock of the under-construction Block II of TRIHMS, the chief minister called for its speedy completion.

“I understand Covid-19 pandemic did hinder the ongoing works, but as the superstructure of the six-floor building is already complete, it must be functional by this year,” he said.

The new block will house the emergency and trauma centre, the cardiac cath lab, 10-bedded intensive care units, 5- to 10-bedded cardiac care units, and a neonatal care unit of 10 to 15 beds, besides cardiac, plastic surgery and burn care wards.

The hospital had started as a state hospital with 140 beds, which was increased to 300 beds when it became TRIHMS. After its conversion, the hospital today has 500 beds and envisages increasing its capacity to 741 beds after completion of all infrastructural components.

TRIHMS, which started its first MBBS course in August 2018, admitted its third batch this year in February. Admissions could not be done in 2020 due to the pandemic.

TRIHMS Director Dr Moji Jini informed that the fourth batch of MBBS students is likely to be admitted this year in September or October to make up for the gap.

The institute plans to have an intake capacity of 100 MBBS students from the present 50, and PG courses in all subjects by 2023-24. It is also exploring the possibility of starting a kidney transplantation programme.

Dr Jini said that “data shows that 309 end-stage kidney diseases and 97 kidney transplants have been recorded in the state.”

Earlier, at the start of the meeting, all members paid tributes to the union health & family welfare ministry’s regional director Dr PJ Gogoi, who passed away due to Covid-19 complications on 9 October last year. He was one of the main architects of TRIHMS.