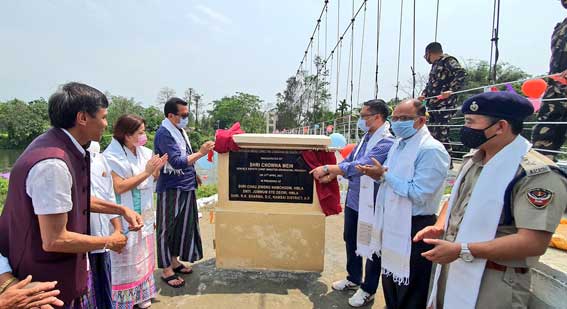 He inaugurated the foot suspension bridge over the Teang river in Chongkham. The bridge, executed by the PWD, will connect Chongkham I and Chongkham IV and ease the movement of people.

Attending a public meeting at the new indoor stadium, Mein expressed hope that the projects would greatly benefit the people of Chongkham.

“Namsai is one of the fastest growing districts in the state and it is also going to be one of the most favoured tourist destinations owing to its improved road surface communication,” he said.

He also called for making efforts to eradicate the growing drug addiction among the youths.

The DCM urged all present at the meeting to surrender their airguns under the ‘airgun surrender abhiyan’ to preserve and protect the district’s flora and fauna.

Raising concern over the illegal and rampant use of forest resources of the district, Mein directed the district administration to check such activities.

He also appealed to all eligible people of the village to get themselves vaccinated.

Earlier in the day, the DCM inaugurated a Mahindra First Choice Service centre at the K&W Autoworld in Namsai.

He congratulated the young entrepreneur for taking the benefit of the Deen Dayal Upadhyaya Swawlamban Yojna and opening the service centre.

“Self-employment is the only way towards a self-reliant Arunachal,” he said.

Mein congratulated the members of the Tai Khamti Heritage & Literary Society and the local experts from Namsai district for opening the store.

“Such initiatives would pave the way towards the revival, preservation and practice of age-old traditional herbal medicines,” he said. (DCM’s PR Cell)