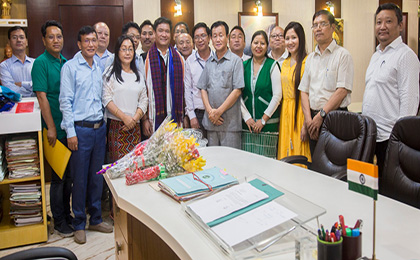 ITANAGAR, Jun 8: Members of the Indigenous Faith and Cultural Society of Arunachal Pradesh (IFCSAP), the Confederation of Service Associations of Arunachal (CoSAAP) and the state BJP Mahila Morcha (BJPMM) separately called on Chief Minister Pema Khandu here on Saturday.
Speaking to the representatives of the IFCSAP, the chief minister acknowledged the contributions of the organization towards preservation of the local culture.
During the meeting with the CoSAAP team, the CM informed that the state government has decided to do away with the SADA and the SIDF systems of planning and financing. He also said a separate IAS cadre for the state “will be secured for sustainable and better administration,” the CoSAAP later informed in a release.
The president of the CoSAAP apprised the CM of the assaults on and victimization of several government employees during the process of conducting the recently concluded assembly and parliamentary elections.
He requested the CM to “collect data, in consultation with the election department, about atrocities meted out to the employees,” and to recognize the services of the victimized employees and compensate them as per the government norms.
The CoSAAP president also urged the CM to “extend the validity of NOC to at least for a period of twelve months.”
Speaking to members of the BJPMM, the CM described the women cadre as “the main pillar of strength of the BJP party,” and said the party has its reach in every corner of the state due to the morcha’s efforts.
He said the state government has prioritized women’s welfare, and that the first file to be signed in his present tenure as the CM was for maternity leave for women contractual and contingency employees of the state government. (With CMO input)