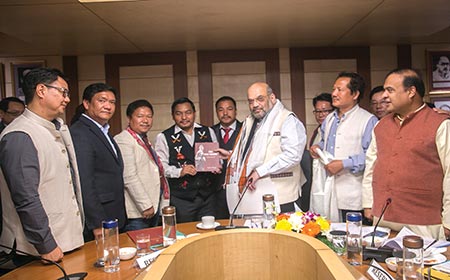 NEW DELHI, Nov 30: Union Home Minister Amit Shah after hearing all the stakeholders from Arunachal gave assurance that the entire regime of inner line permit (ILP) in Arunachal, including applicable provisions of the Bengal Eastern Frontier Regulation, 1873, and the Chin Hills Regulation, 1896, will be suitably incorporated in the proposed citizenship amendment bill (CAB).
He said this during a meeting on Saturday, which was attended by representatives of organisations and political parties from the state. Shah further assured the team, led by Chief Minister Pema Khandu, that “there will be zero impact to the state of Arunachal Pradesh, to ensure the interests of the indigenous people of Arunachal Pradesh.”
Shah assured that the Centre would sincerely consider all the concerns raised by them with regard to the Citizenship (Amendment) Bill, 2019, to protect the interests of the Arunachalees.
Khandu raised the concerns of the indigenous tribal communities of the state, and
said the state unequivocally opposes the CAB. The CM further requested that a special provision be made to protect the interests of the indigenous tribal communities of the state, in accordance with the strong public sentiment. He said strong protective measures need to be incorporated in the bill on the following lines:
“For the state of Arunachal Pradesh, all provisions of the Bengal Eastern Frontier Regulation, 1873 (Regulation 5 of 1873) and all provisions of Sections 22, 23, 38 and 40 of the Chin Hills Regulation, 1896 (Regulation No 5 of 1896) shall be deemed to have been enacted under this act and shall have effect accordingly; and that the provisions of this act shall not be made applicable to any person who has been residing in or has entered or may enter the state of Arunachal Pradesh in violation of the Bengal Eastern Frontier Regulation, 1873, or the aforesaid provision of Chin Hills Regulation, 1896, or the Criminal Law Amendment Act, 1961 (Act No 23 of 1961) as amended from time to time.”
Union MoS (Independent) for Youth Affairs & Sports, Kiren Rijiju, Deputy Chief Minister Chowna Mein, Lok Sabha member Tapir Gao, Home Minister Bamang Felix, APCC president and former CM Nabam Tuki, state NPP president Gicho Kabak, NPP MLA Tapuk Taku, JD (U) MLA Hayeng Mangfi, PPA president Kahfa Bengia, AAPSU president Hawa Bagang, NESO coordinator Pritam Waii Sonam, and AITF president Tarh Tabin attended the meeting.
Shah on Saturday held discussions with leaders of political parties, student bodies and civil society groups of Assam, Arunachal and Meghalaya on the contours of the proposed CAB, sources said.
The bill seeks to amend the Citizenship Act, 1955, in order to grant Indian nationality to Hindus, Sikhs, Buddhists, Jains, Parsis and Christians who come to India due to religious persecution in Bangladesh, Pakistan and Afghanistan, even if they don’t possess proper documents.
The home minister is holding the series of meetings on Friday, Saturday and on 3 December, in the wake of strong protests in the Northeast against the CAB. (CMO & PTI)