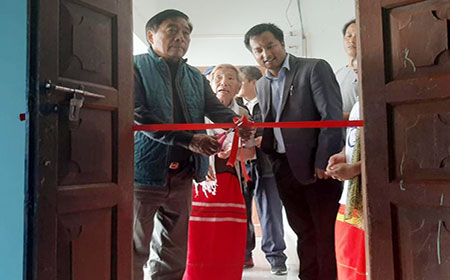 [ Mingkeng Osik ]
PASIGHAT, Mar 17: Former chief minister and Donyi Polo Mission chairperson Gegong Apang on Tuesday inaugurated the ALS IAS satellite institute at Komut building near Donyi Polo hotel, here in East Siang district.
The institute is opened in collaboration with Itanagar-based Donyi Polo Mission under the directorship of Mone Yonggam.
Donyi Polo Mission director Mone Yonggam informed that the ALS Pasighat has been officially opened for registration today. “It will be a great opportunity for all the UPSC/ APPSC aspirants who want to avail the benefit of ALS IAS and the institute will also cover all the neighboring districts of eastern Arunachal,” she added.
The institute consists of four classrooms, a cafeteria and a library where live transmission of classes will be conducted from Delhi via VSAT technology to give students access to best teaching at the comfort of their hometown.
Veteran teacher Tagung Komut, member of Donyi Polo Yelam Kebang Karo Moyong and members of Buddhist Society Pema Thundup and Lama Lhundup Wangchu, among others, attended the ceremony.