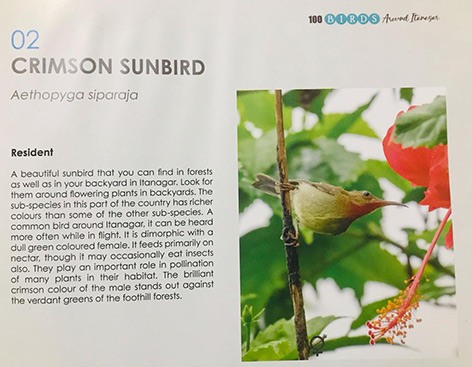 It is a visual delight, and therefore engrossing, and also debunks the popular belief that we have killed all the birds.

The book is by Harsha Vardhan Mandava, an Indian Police Service officer, and Bengia Mrinal, who runs BAC Voyages, a birding and wildlife-focused travel company.

While one is tempted to jump straight to the mesmerizing pictures, the introduction of the book is worth a read.

The authors write: “When we went to various places in and around Itanagar, with our rather conspicuous and attention-drawing cameras, we were met most often by pessimistic residents. They would declare that there are hardly any birds left due to hunting, and the older ones would reminisce about the decades long gone. There are many species of birds which are fairly common in the forests around Itanagar but would be very hard to find elsewhere in the country. This book is an ambitious attempt to raise awareness about the amazing diversity of birds found in these foothills of the eastern Himalayas. The other groups of people we usually met in the forests were not so pessimistic and they were also there to shoot the birds – with guns…. This book aims to let people know that shooting with a camera can be a satisfying experience as well.”

The accompanying texts are not long or exhaustive, which makes it an ideal book for children and those who do not like long texts but are interested in avifauna.

The book has a foreword by Shashank Dalvi, a celebrated birder. He writes that when he visited the Eaglenest Wildlife Sanctuary in West Kameng – a popular destination of birders – for the first time in 2004, “it had less than five birders then, none of whom were local.”

The foreword gives a glimpse of the birding scenario in the state.

The book also has a message by Chief Minister Pema Khandu, who writes that the book “serves as a timely reminder about the avian biodiversity in the state and the need to protect it.”

Home to more than 700 species of birds, including the Bugun liocichla, the Himalayan forest thrush and the rusty-throated wren babbler – the three of the four new species recorded since India’s independence – Arunachal is a birder’s paradise.

Many research papers have been published on birds in the state and this coffee table book is an addition to that, and is one of the few comprehensive collections on birds.

The authors share that they spotted 160 species, of which only 100 have been listed in the book. Designed by NK Works, Itanagar, the coffee table book details 100 birds, both residents and visitors.

In a dusty, noisy concrete town always under construction, it is heartening to note that the forests in and around Itanagar is home to many birds. Not all have flown away. (Self-published, the book can be bought online from Amazon, and from Reader’s Realm book cafe, Itanagar)