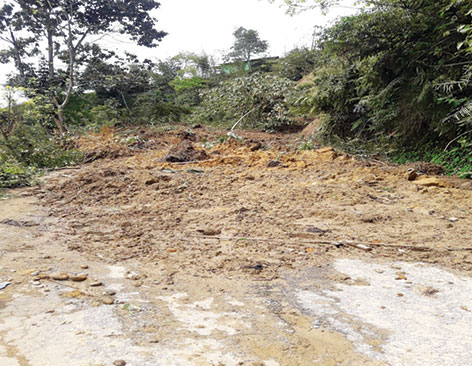 KOLORIANG, 18 Apr: Three members of a family were buried alive in a landslide that occurred in Sulung Taping village in Kurung Kumey district on Sunday night.

Two persons escaped unhurt, and search operation is on to trace the buried bodies, the DC said.

Heavy and incessant rain on the night of 17 April triggered landslides in different locations, especially in the district headquarters here, snapping surface communication and disrupting water and electricity supply.

The district headquarters remains cut off from the rest of the state since Sunday night. The roads are blocked in several places in between the old DC office and the mini-secretariat in Malapu.

Landslides also damaged 15 houses and are posing a serious threat to vulnerable buildings and vehicular movement.

Water and electricity supply remains disrupted in the district headquarters since Sunday night.

The district administration has issued a traffic advisory, urging people to avoid travelling, in view of the inclement weather. (With inputs from DIPRO)