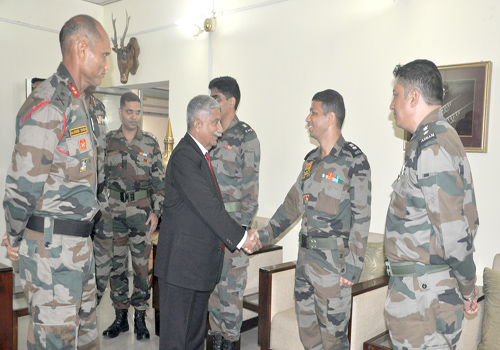 NAMSAI, Sep 10: Governor BD Mishra, who is on a three-day tour to ‘aspirational district’ Namsai, reached here on Monday.
The governor was briefed by Namsai DC Tapasya Raghav, SP Singhjatla Singpho, and ADC Bijoy Talukdar on the ‘aspirational’ context of the district, as also on the projects under the aspirational district programme.
Mishra also met the head priests of Parasuram Kund, Hari Charan Das and Om Prakash Giri (also known as Swami Prakashnam) at Namsai and shared his proposal for a holistic development of the Parasuram Kund complex.
“Keeping the Indian culture and traditions undisturbed, Parasuram Kund must be developed in such a manner that it continues to promote spiritualism and age-old values,” the governor said.
He said the Parasuram Kund complex should be developed to facilitate yearlong pilgrimage “with good approach road, hospital facilities, living amenities, and neat and hygienic public conveniences.”
Earlier, at the Army brigade headquarters in Laipuli (Assam), 2 Mountain Division GOC Maj Gen Gajinder Singh called on the governor during his brief halt there to meet the jawans.
They discussed the security and operational readiness of the formation, as also the avenues where the Indian Army can help in socioeconomic development of the people of Arunachal Pradesh. (PRO, Raj Bhawan)