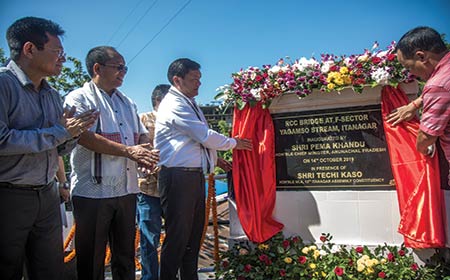 ITANAGAR, Oct 14: Chief Minister Pema Khandu on Monday inaugurated the 16m RCC bridge over the Yagamso stream here at F-sector, which is expected to ease the traffic congestion in the state capital.
The chief minister said the opening of the bridge has come as a huge relief and would ease traffic congestion on NH-415 between RK Mission Hospital to Bank Tinali with the alternate route opening of the southern ring road traffic from RKM hospital to Zero Point.
The chief minister appreciated the state Public Works Department for completing the work two months ahead from the target date of completion.
The bridge has been executed by PWD capital division A and the contractor is George Construction.
The chief minister also assured that the alternate route through ESS sector will also be opened by March 2020 and ease traffic congestion in the coming days.
“The traffic along that route had been shut due to the landslide on which work has already been started,” informed the CM.
He further informed that Rs 100 crore has been placed for improvement of all sector roads in the state capital region. Also, within the next five years, the CM said all the internal roads in the administrative headquarters across the state will be improved.
Regarding the ongoing Itanagar-Naharlagun four lane work, the CM said he has constituted a committee comprising officials of the Chief Minister’s Office (CMO) and they are monitoring the progress of work.
“The committee regularly visits the work sites including during night time to check whether work is progressing as per planning.
The work progress has been affected due to long monsoon this year. However, the contractor has assured to pick up pace as the weather is clearing, and hopefully, blacktopping will be completed in Itanagar within the next two months,” the CM said.
Expressing concern over the deteriorating condition of the Hollongi to Itanagar road, Khandu informed that he is pursuing the matter with the Ministry of Road, Transport and Highways (MoRTH).
“I am aware that the condition of Hollongi to Itanagar road is in bad shape. The MoRTH is supposed to maintain this road as it falls under their jurisdiction. Recently, when MoS (MoRTH) VK Singh visited state, we had apprised him about the situation. I am going to pursue the matter with the ministry,” the CM added.
Additionally, SID&P Chief Engineer Atop Lego informed that the PWD has worked out detailed plan to decongest the capital road, and are working towards it.