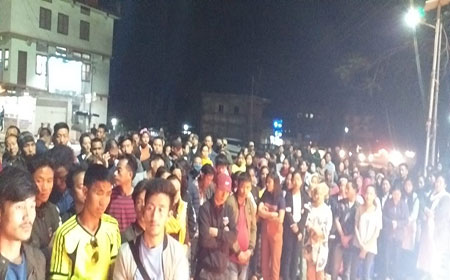 AALO, Mar 6: The Galo Students’ Union and the Adi Students’ Union, in collaboration with various organizations of West Siang district on Friday organized a candlelight march at the market here in West Siang district to protest the killing of IRBn constable Tapop Yajo, who was shot dead on early Tuesday morning by unknown miscreant(s) in the premises of the CJM court here.
The members of the organizations also observed a two-minute silence in late Yajo’s memory.
Members of the organizations, including the Galo Welfare Society’s women’s wing, the ABK’s West Siang unit, the Aalo Area Students’ Union, the Kargu Kardi Students’ Union, and the Paktu Ao Youth Organization vehemently condemned the killing of the IRBn jawan and demanded swift arrest of the culprit(s).
They also demanded compensation of Rs 1 crore, along with a government job on compassionate grou-nd, for the bereaved family, besides erecting of a statue in memory of late Yajo in the court premises within a month.
The organizations said they would resort to a democratic movement if the government fails to meet their demands.

Orgs seek inquiry into death of Jerang & her unborn twins